…But Not Orangeville By-law Enforcement Who B-Flat On The Idea. 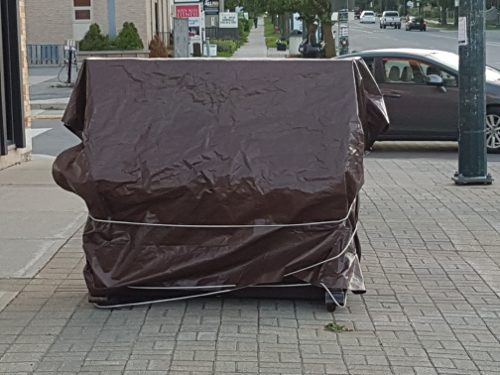 Piano In Front Of The Altered Native Shop, Orangeville, ON

Sometime in mid June, 2017, a tattoo shop in downtown Orangeville, The Altered Native, received a donation of piano. The management of the shop decided to place the piano on the sidewalk in front of their premises and invited anyone who wanted, to come and play it. Of course, all were invited to listen to any pianists that took up the offer. It seems the idea was a big hit with many, except for at least one person who made a complaint to the Orangeville Bylaw Enforcement department.

The enforcement officer decided that the piano was against the town’s bylaws and according to the Orangeville Banner, Carrie Cunningham advised that the piano being placed on the sidewalk of Broadway constituted a littering offense.

Many of the residents in and around Orangeville certainly don’t see this piano, and the opportunity it provides for people to make and listen to music, as a piece of “debris” – in fact, it’s much less of an eyesore some of the other things you might find up the back alley behind Broadway.

In fact, the idea of The Altered Native being charged with a bylaw offence that could see a fine has high as $5,000.00, has really irked residents in town and surrounding area. Recently, a petition was started by Shelburne resident Wendy Simpson which at the time of this writing, has already garnered over 1,000 electronic “signatures” on change.org.

This evening, we went out for a walk to check out the piano, with the hope that we could play a few tunes remembered from childhood piano lessons and find out what all the fuss was about. But when we arrived, it had been wrapped up with a tarp, presumably for the night and to keep any rain away. There were other interested people also checking out the location of the piano and who thought it was a fantastic idea to have this musical instrument for anyone to try, in the middle of town.

Our own thoughts are that it’s a bit ironic that in the Town of Orangeville, a piano on the sidewalk would be considered a piece of “debris” or trash. This is Orangeville! Home to one of the best blues and jazz festivals in the Province, if not the whole country, other festivals whee live music is played, and pubs and restaurants where musical entertainment is enjoyed by all, and much of it outdoors in the warmer months.

We’re not sure if that Altered Native piano needs to be tuned, but we’re pretty sure that Orangeville’s Enforcement department needs to be tuned into what the majority of the residents think of as “debris” or “trash.” But hey.. we also know from experience that some law enforcement types simply don’t like legitimate businesses that provide tattooing services and who also may support home use of cannabis.

Whatever the case is, we hope the Bylaw Enforcement department takes a “grand pause” in this matter and doesn’t end up to b-flat on its of understanding of what “debris” is. Presently, they seem to be out of tune and need to sharpen up a bit.